In Memorium – John Vairo, Rotarian since 1971 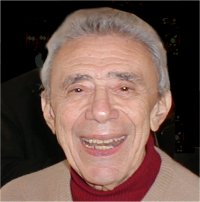 John D. Vairo, founding campus executive officer of Penn State Brandywine and a resident of Middletown Township since 1967,died January 1, 2012 after a one-year battle with esophageal cancer. He was 91.

He served in the U.S. Navy as a navigator during World War II and was discharged as a lieutenant (jg).

From 1956-67, he was an associate professor of journalism at Penn State’s University Park campus and served as advisor of the student newspaper, the Daily Collegian.

He was chosen in 1967 by Penn State’s then-president Eric Walker and the University’s Board of Trustees, to found Penn State Brandywine (then known as Penn State’s Delaware County Campus) and served as the executive officer, an office he held until his retirement in 1986.

Vairo began the campus in Chester in temporary facilities, a former fish market below a roller skating rink, with 11 full-time faculty and 236 students. The campus moved to its current location on 90 acres in Middletown Township in 1971. When he retired in 1986, the campus had 60 full-time faculty, 1,400 students, and two major buildings.

In 1995, the campus’ library was named the John D. Vairo Library in his honor. The John D. and Greta C. Vairo Scholarship was named in honor of Mr. Vairo and his wife Greta to provide scholarships to campus students who were continuing their education at the University Park Campus. The John D. Vairo Library Endowment Fund was established in his honor to raise funds for the campus’ library.

At Neumann University, he was a member of the advisory board for the LINC program and served on the Physical Therapy Committee.

He was instrumental in founding three planning commissions in the State College area: the

Patton Township, Centre County, and Centre Regional Planning Commissions, and served as chairman of all three. Vairo Boulevard in State College was named in his honor for this work. He also was a member of the Pennsylvania Planning Association.

Mr. Vairo was made an honorary board member of the Healthy Communities Initiatives in Media, PA was recognized as one of the top 50 people in Pennsylvania to help schools at the secondary and post-secondary level improve their school newspapers by the Columbia University Scholastic Press Association, and received the Delaware County Chamber of Commerce Lifetime Achievement Award and the Friend of the Community Award from the Congregation Beth Israel of Media, PA.

He was a member of St. Francis De Sales Catholic Church in Lenni since 1967 and served on several committees.

He was preceded in death by his wife of 59 years Greta A. Vairo who died in April 2009.