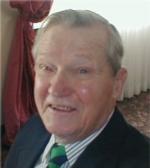 O.Warren Higgins, Esquire, 94 O.Warren Higgins, Esquire, 94, passed away at home on November 4, 2012. Born and raised in the Penfield section of Haverford Twp., Warren was the son of the late Oliver Higgins and Edna Magee Higgins. Warren graduated from Haverford High School in 1936; Bucknell University in 1940 and University of Pennsylvania Law School in 1948. He served with the Army Air Force in World War 111942-1946 at Ft. Logan, CO, then with the 5th Air Force in the Pacific Theater on Mindora and Luzon in the Philippines, and Okinawa and finally with the occupation forces in Japan. Warren was admitted to the Delaware County Bar in 1948; served as law clerk for Judge William R. Toal Sr. Judge Louis A. Bloom, Judge Paul R. Sand and President Judge Francis J. Catania. He also served as former Assistant District Attorney. Warren was a former member of the Delaware County Board of View and a Mental Health Review Officer 1977-1998. He was also in private practice in the field of probate and estate law. He served as a member of the Board of Directors of the Delaware County Bar Association, and as chairman of the Law Library Committee, the Legal Directory Committee, the Historical Records Committee. Warren was past President of the Havertown Rotary Club and member and Past President of the Media Rotary Club; Past President of the Media Rotary Foundation, Paul Harris Fellow, Gundaker Fellow, member of the Cato Institute and past chairman of the Delaware County Young Republicans. Warren’s many interests included a passion for skiing and steam engines and trains. He enjoyed history, flower gardening and working on the computer. Above all, he loved his family especially his five grandchildren. He will always be remembered as a true gentleman. Survivors: Loving wife Carole; son Christopher; step-son Raymond ( Christine) Williams; Michelle (Gregory) Kowall; grandchildren Carolyn, Brandon, Adam, Carly and Danielle. Memorial Service will be held on Saturday November 10, 2012 at 11:15 AM at Rigby, Harting & Hagan Funeral Home. 15. E. Fourth. Street, Media, PA. Calling at the funeral home at 10 AM. Interment Edgewood Memorial Park In lieu of flowers, contributions can be made to the Boy Scouts of America. Arr: Rigby Harting & Hagan Funeral Home.