In Memorium – Ed Beadle, Rotarian since 1985 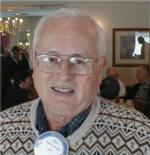 Dr. Edward John Beadle, 84, Dentist Media, PA. Dr. Beadle, of Wallingford, died Saturday Oct. 28, 2017 of natural causes in Bel Air, MD. He was born in 1932 to John and Katherine (nee Gallagher) Beadle in Radnor, PA. He grew up with his brother, Tod Beadle (deceased). After Radnor High School, he received a scholarship to attend Brown University in Providence, RI. He served in the US Army and obtained the GI Bill and graduated from the University of Pennsylvania Dental School. In 1961, he partnered with Dr. Richard Craighead to form Media Dental Associates. He practiced there until his retirement in 1999. He advocated for the public and succeeded in his campaign to bring fluoride to the Media Water Company in 1965, a first in Pennsylvania. He was a member of the Media Rotary Club since 1986 and served as its high school foreign exchange program director. He and his family hosted numerous foreign exchange students. He was a youth coach of baseball and basketball in the Nether Providence Athletic Association in Wallingford, as well an amateur ham radio operator. He was a member of St. John Chrysostom Catholic Church for over 50 years. He is survived by his wife of 58 years, Mary Jane (nee Zigrand); 3 Children, Robert, Karen Barnaba (Thomas), and James (Kim). His son, Edward Beadle, Jr. passed away at age 19 in 1979. While he loved his children, he may have loved his six grandchildren even more. Many will remember Dr. Beadle as their dentist. It seemed that he had many patients for his entire career who were also his friends. He enjoyed life and will be missed by family and friends. “He was a man devoted to his faith, his family, his community and his country.” His Funeral Mass will be held on Saturday, November 4th at 11:30am at St. John Chrysostom Church 617 S. Providence Rd. Wallingford, PA. Friends and family are invited to call from 10-11:15 am in church. Burial will follow in SS Peter & Paul Cemetery. In lieu of flowers, donations in his name can be made to the Rotary Foundation of Media, PO Box 2028, Media, PA 19063. www.carrfuneralhome.net