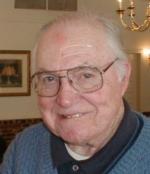 Col. David E. Pergrin, 94 Decorated Veteran Col. David E. Pergrin, 94, died in Shrewsbury, PA on April 7, 2012. He was a proud Penn State University graduate, a football letterman and a member of Skull and Bones, Lion’s Paw, and the engineering honor societies. As president of the class of 1940, Col. Pergrin guided the selection of the Nittany Lion statue as the class gift. PSU awarded him the Outstanding Engineer Alumni Award from Penn State in 1988. He has been married to Margaret Mary Cimahosky since 1941. He was the commander of the 291st Engineer Combat Battalion, (the most decorated Engineering Battalion in W.W. II). Col. Pergrin was awarded the Purple Heart, Silver Star, Bronze Star, the Presidential Unit Citation, the Croix de Guerre from both France and Belgium, and the Silver order of the De Fleurry Medal. Col. Pergrin wrote two books on his war experiences: First Across the Rhine and Engineering the Victory. Col. Pergrin was awarded the Freedom Foundations’ George Washington Medal of Honor in 1998. After the war, Col. Pergrin worked for the Pennsylvania and Penn Central Railroads, retiring as the Vice President and Chief Engineer. He was active in the Boy Scouts of America, and was awarded the Silver Beaver Award for his years volunteering as a leader and a merit badge counselor. Col. Pergrin wrote three books on woodcarving, (The Carver’s Handbook I, II, and III) and helped establish the annual William Rush Woodcarving Show in Delaware County, PA. Col. Pergrin believed that every day was a gift and his life was a gift to those who knew him. Survivors: His wife Margaret; his daughters Bernadette Marriott of Mt. Pleasant SC, Patricia Brown of Frederick MD, Janeen Rastall of Marquette MI and Meg Bohn of Sugar Hill, GA; son David Pergrin of Shrewsbury PA; grandchildren and great-grandchildren; sister-in-law Evelyn Pergrin of Pomona, CA; several nephews and nieces. Funeral Liturgy will be held at 12 Noon Saturday April 14, 2012 at St. John the Baptist Roman Catholic Church, 315 N. Constitution Ave., New Freedom, PA. Interment will be in the church cemetery. Viewing will be held on Friday 6 to 8 PM with a Vigil Service beginning at 7:30 PM at J.J. Hartenstein Mortuary, Inc., 24 N. Second St., New Freedom, PA. In lieu of flowers, a donation may be made to the David E. and Margaret M. Pergrin Scholarship, Office of Development, Penn State Brandywine, 25 Yearsley Mill Rd. Media, PA 19063.